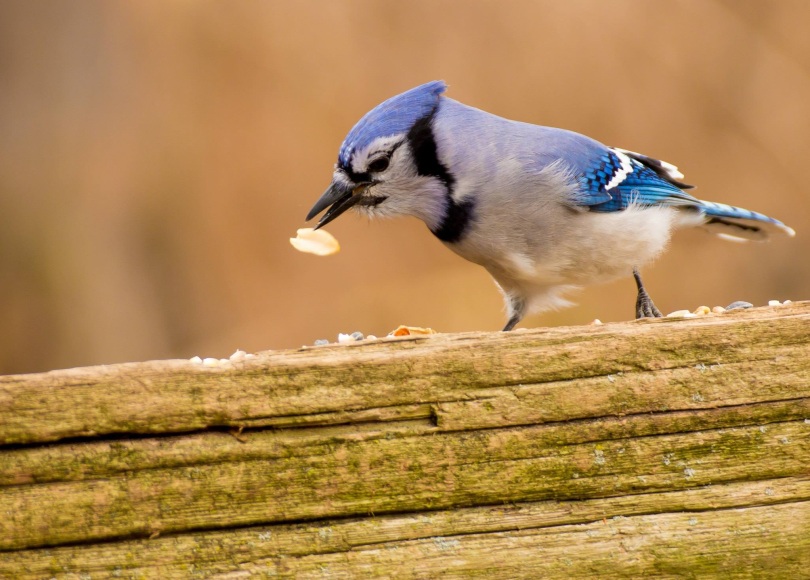 The Blue Jay is native to North America and is a member of the Crow family. It’s range spans from the forests of northern Ontario across to Prince Edward Island and down to Florida. Some Blue Jays may migrate, especially if natural food sources are low, such as acorns, beechnuts, wild fruits, and hazelnuts. They migrate by day in flocks varying in numbers from 5 to 50.  I have seen them fly in these numbers from my own backyard, but they don’t all migrate as I am fortunate to enjoy them all year.

2.Why the name Bluejay?

The name Blue Jay is derived from Greek and Latin words meaning crested blue chattering bird.  It’s call, which sounds like ‘Jay, Jay’ can be heard throughout woodlands and neighborhoods in eastern North America.

Blue Jays are also known to warn other birds of nearby predators such as hawks with their loud call.  They do have a variety of other calls which are not as harsh and can be quite musical, as well as imitating other birds.  They are especially good at imitating the call of a Red-Tailed Hawk.

An interesting fact about Blue Jays is that their feathers are not actually blue.  Hinterlands Who’s Who tells us that “blue pigment is unknown in birds, and the colour results from refraction, or distortion, of light by a peculiar inner structure of the feather substance.”  This also applies to Indigo Buntings.

Blue Jays will happily feed at backyard feeders.  They especially like peanuts, sunflower seeds and suet.  They will sometimes hide their food under trees and shrubs and return later to eat.  Blue Jays prefer a large tray feeder or hopper feeder. They can be quite comical when choosing which peanut to take.  They will pick the peanuts up with their bills and if it’s not heavy enough, they will put it down and select another one.  If you offer a feeder and food for these birds you can enjoy their antics all year!

The jays rub ants on their feathers, draining the ants of their formic acid before they gobble them up. This is known as “anting.” How birds perform anting, they may simply squat or lie on an anthill shaking their wings and tail to stir up the ants, a behavior which is called passive anting.

So why do birds perform anting whats the benefit of this behavior well the most common suggestion is that the ants’ defensive chemicals help combat the birds’ parasites. Other possibilities are that the ant chemicals relieve the itch of molting for birds.

@Urban Nature Store we have different vareity of feeders, seeds, jewlary, outdoor equipments and holiday gifts for all nature lovers and for all ages.

Bird of the month – Blue Jays – check out blue-jays products

By Daniel Oommen and Jane Paradis

This site uses Akismet to reduce spam. Learn how your comment data is processed.