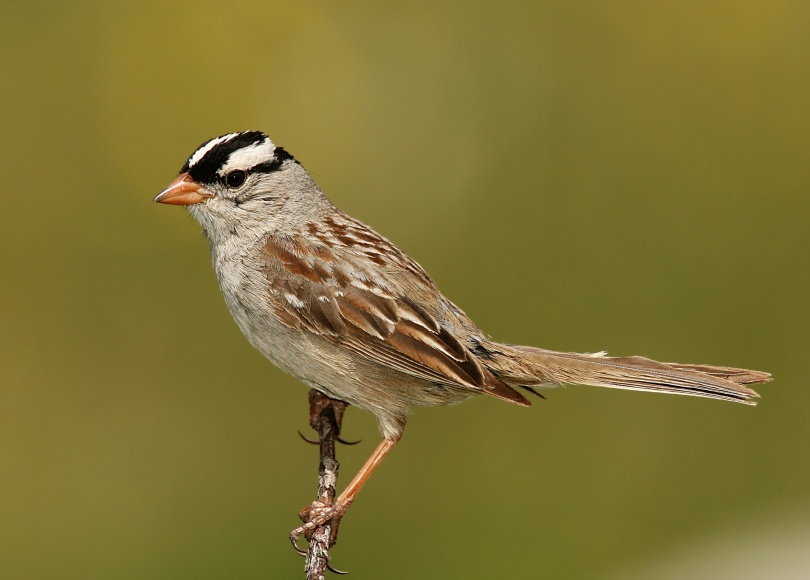 True to its name, this sparrow is easy to identify, sporting a bold black and white striped crown on their head. In their western region the crown isn’t as vibrant. White-crowned Sparrows are medium-sized sparrows with a grey face and breast, brown streaked back with white bars and a long tail. Their head feathers can be peaked or flat depending on their attitude. Their bill colour depends on their habitat, in the east it is a pinkish colour and yellow in the west.

White-crowned Sparrows breed throughout northern Canada from British Columbia, the northern Territories to Newfoundland and Labrador. During migration we are able to see them in Quebec, Ontario and the prairies. White-crowned sparrows prefer to travel in small groups of its own kind unlike other birds who will flock together with a variety of species. They will share their territories with Fox Sparrows.

White-crowned Sparrows prefer brushy habitats, staying in the cover of shrubs for safety. In the west their nests are built 1.5 to 10 feet high in trees and shrubs. Those who breed in the northern parts of their range have to build their nests on the ground concealed under shrubs and dense vegetation. The female constructs the nest with pine needles, twigs, dead leaves and grasses. The nest measures 5 inches across and 2 inches deep. She will line the nest with finer grass and animal hair. Three to seven greenish-blue eggs speckled with brown will be laid and incubated for 10-14 days by the female. White-crowned Sparrows will have 1-3 broods. The young can leave the nest 8-10 days after hatching. The oldest White-crowned was recorded in California at 13 years, 4 months.

White-crowned Sparrows have 10 differing song variations. This will depend on where they are found across the country. They will learn the song from their father, and then adapt their own version from other songs they hear. The song will normally start with one to three clear notes followed by descending trill. White-crowned Sparrows forage on the ground for food, raking the ground with a back and forth motion. This can be quite noisy making them easy to locate. They will look for insects and the seeds of weeds and grasses. If you can leave part of your garden on the wild side, this will entice them to visit your yard. They can also be tempted with seed placed on the ground or in a ground feeder. I have observed them on my deck enjoying our Fiesta seed blend.

While researching these spirited birds I learned they have a ‘natural alert mechanism’ which enables them to stay awake for two week periods during migration. White-crowned Sparrows were also observed in Cley Next to the Sea, in Norfolk England in 2008. To commemorate this event, a window in St. Margaret’s Church was designed with an image of this bird.

Be sure to look for these lively birds during spring and fall migration!

This site uses Akismet to reduce spam. Learn how your comment data is processed.